Solo conducted a three days... adulterous affair with Chantal Taien, the short coated litter sister and kennel mate of his former fiancee, Chispa. It was an intense story, with two willing, playful and happy heroes. It is not us who decide, obviously. Nevertheless, it seems the right decision. 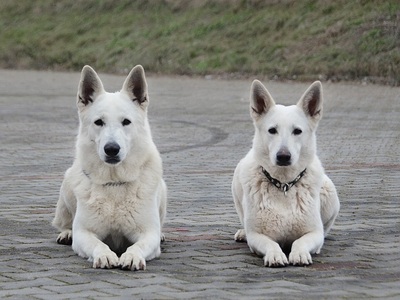 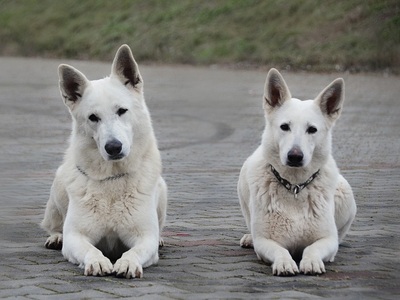 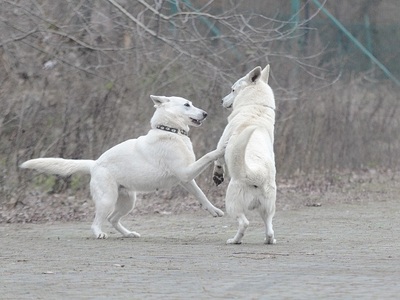 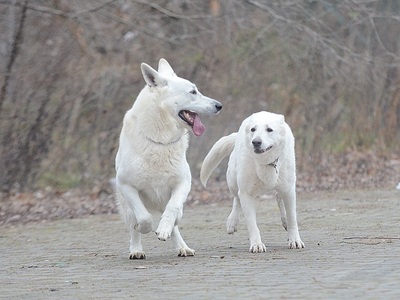 Mummy Luana passed her IPO2 exam today, in a pouring raing / November storm that would have discouraged anyone to even get out of the house. Congratulations, Anika - we are extremely proud of yourself and extatic about the mother of Gandhi.
October 30th

The Czech Kennel Club approved the mating of the lovely Chispa Taien with our Solo. This is the union that both Marketa and I had dreamed about for over a year. The stunning beauty of my bohemian Solo and the exquisite charm of delicate Chispa, doubled by her well-proven motherly qualities, make us hope for great puppies, ready to excel in shows and sports, unequaled companions to us, humans. And for an even stronger friendship between our two families of whites. 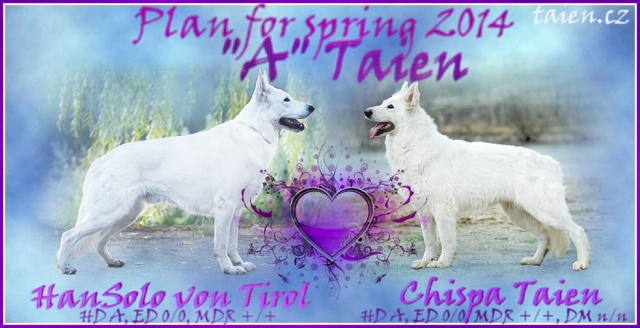 Gandhi participated in her first 2xCACIB as a puppy, this weekend. She was considered Very promising1 on both days and won Best puppy on day 2. What made her really happy was the feast in the evening, feast to which everyone else was invited - even if none of the others did any of the work. Hmmm!
September 6th

Mahi went to Hungary today and had her hips and elbows X-rayed.
August 30th

Sister Manini just became European Junior Winner, in Geneva.
Cousin Laila is Vice European Winner.
This is certainly yet another Skah Dakota year in the world of the White Swiss Shepherds. Mahi and I could not be other than extremely proud and extraordinarily happy to belong to this amazing family.
Congratulations, Thorsten, for raising these incredible young females - the youngest in a long line of great winners.
August 24th

Gandhi made her debut today, participating in two dog-shows in two different countries. She was considered Very promising 1 and won the Best Baby title on both shows (Oradea in Romania and Debrecen in Hungary). Her chaperone, Mahi, was just an interested spectator in Oradea, and later in the evening won the Intermediate class at Debrecen, with a well deserved Excellent 1. It was her first show as an adult, just five days after the age of 15 months.
July 28th

Mahi is Junior Champion of Hungary.

my wonder boy, my swimmer, player, working dog, the lover of shows, my top-model, my reliable shepherd, my lonely wolf - you, who stare into my eyes like no male ever should...
June 27th

Ahlitah is no more.
May 20th

Gandhi has come home.
May 19th

Mummy Ghuna became World Winner (and Hungarian Champion) on the first anniversary of her litter M. We were together on this wonderful day, happy for Ghuna (and the entire successful Skah Dakota family) and extremely proud for my Excellent (Junior class) Mahi, who won 3rd place in the Progeny class, with daddy Brit, sister Manini (Brit & Ghuna) and half-sister Agatha Charming (Brit & Astrid).
What mattered most, on this day, was the feeling of belonging, of really having a family to share the happy moments with. Thank you, Geert and Trees, thank you, Thorsten, Goga. 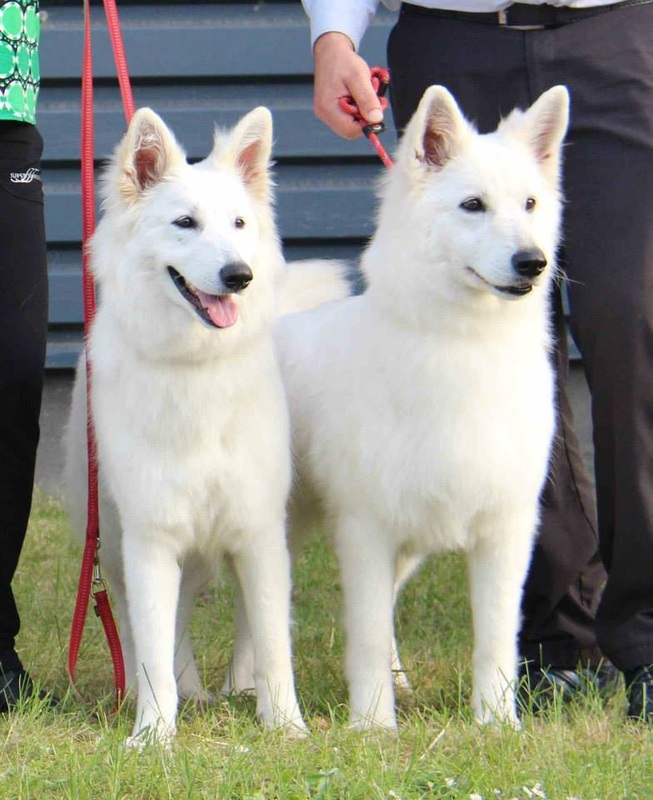 Mahi, celebrating her first anniversary with her exquisite mother, Ghuna Gauri of Skah Dakota, at the World Dog Show 2013 in Budapest (Hungary).
May 19th

my little princess, born so far away, who - like no one else - knew how to endear herself to me. My beautiful, calm, inquisitive, patient Mahi, may you enjoy life with me as I do with you, for many, many years more!
May 15th

The first event of the Hungarian week of dog-shows meant a normal day at work for daddy Brit (who, in his usual relaxed manner, won Res-CAC in the Champion class) and a well-deserved success for mummy Ghuna, who won the CAC, CACIB and BOB titles - thus becoming winner of the Budapest Grand Prix. Also counting the Res-CAC of sister Karuna and the JCAC of cousin Laila, this series of dog-shows that will culminate with the World Dog Show on Sunday, started quite well for the Skah Dakota family. Mahi and I will keep our fingers crossed for mummy and the girls to keep on the good work - while we join daddy for the Progeny class competition, on Sunday afternoon.
Let us hope we shall deserve this honour!
May 12th

Mahi is Junior Champion of Serbia.

Her first weekend abroad meant, for Mahi, yet another succession of... dog-show small triumphs. She won her class, the Best Junior and BOB titles, on both days; she then became R-BOG1. This makes Mahi, technically, a Serbian Junior Champion.
The best news is that she enjoyed her first weekend abroad, alone with mum. Our long walks by the Danube, the little games we played, the junk food (I admit, I allowed Mahi to sample all my food), the hotel, the dog-shows venues (a park and a medieval fortress) in a country that is beautiful in itself - so many motifs to enjoy ourselves.
A special thanks to our friend Srdjan, from the Ice Lilien kennel, who helped us all through this weekend - again!
April 29th

Another double CACIB for Mahi, the first in summer heat (over 30 degrees Celsius). She is not o fan of Romanian summers, but she did a great job. She was considered Excellent 1 and won CACJ, Best Female, Best Junior and BOB on both days. The highlight of the first day was, in her opinion, meeting Andiamo, a gorgeous Champion guy from Serbia - she even agreed to share her hair brush and her eatable goodies with him!
April 17th

Mahi is Junior Champion of Romania.

Freshly out of her first heat, Mahi participated in one of the biggest dog-shows in Romania, a double CACIB out of which one is also the Romanian Open tournament. She behaved greatly, winning her class, the CACJ title, the Best Junior and the Best of Breed titles - on both days. This makes her a Junior Champion, at the age of ten months. A daughter of huge champions, she is the first of her litter to win a Junior Champion title in her adoptive country.

Brit, the father of Mahi, was finally confirmed International Beauty Champion by the FCI. This is a moment the entire extended family of Brit expected for some time now - he is impressive from the moment you set your eyes on him, but our privilege to be related allowed us to know him deeper than his flawless exterior. His looks, his behaviour, his endless patience when humans are concerned, the warmth and the ease with which he handless everything and everyone, his perfect relation with his human companion, Goga, are some of our motifs to love Brit.
Well done, daddy Brit. Well done, Goga. We are so proud of you!
January 20th

Today, the 8 months and 1 day old Mahi began her competitional year 2013 as a "Very promising1" young lady, and subsequently became Best Puppy.
To quote the Judge (unofficial description), she is very well developed for her age, with an excellent body structure, very well developed muscle mass, excellent backline and angulations, fluid movement and excellent posture. She also has a beautiful, feminine head with perfectly set ears, amazingly dark eyes, complete dentition with perfect scissor bite, black lips and nails.
To speak my own language, Mahi does not cease to amaze me. Although volcanically playful in daily life and not really patient during the hours of waiting outside the ring, she becomes the perfect show-dog when she enters the ring. Patient, calm, curious, willing participant in the small events in the ring, she is able to spend there as much time as needed; perhaps even go in again, just in case the judge and the spectators have not seen everything about her. She is her best in the Main Ring, where the increased number and diversity of the dogs present is very much to her taste. She flourishes.

Our long-time friend Aron just received his confirmation as an International Beauty Champion. This came as no surprise, since he is one of the most constantly successful White Swiss Shepherds, for years and years the most beautiful male in this part of the world. His beauty, his character, his personal achievements and his offspring made us wonder not if, but when this title would come.
Congratulations to our beloved Aron and our dear friend Branka, who has helped Aron become the great guy he is - and was certainly helped by Aron (and by Vajlis before Aron) to fully prove how amazing she is.
January 4th

my perfect girl, the one I secretly called "the stranger", not willing to accept as mine.
Ahlitah, who raised and educated Solo - acting like a mother,
though just a few months older than him.
Ahlitah, who from day one assumed the leadership in our pack.
Ahlitah, the kisser, the protective. The playfully lazy.
Ahlitah, who still has so much to teach me. About motherhood. About being in control.
About love.